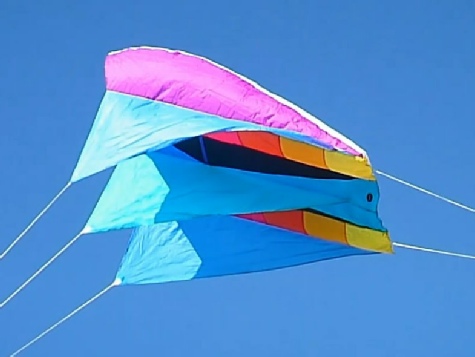 Like the Skyform 15 above, this kite was designed to replace the now-defunct Sutton Flowform 16.  The Ultrafoil,  however, has been considerably modified by the designers, Ray and Jeanne Merry of Cobra Kites, and is not just a copy of the Sutton kite.  It is extremely well made; all seams are strongly sewn, and the vents on top and bottom surfaces are mesh-covered for strength and stability.  It is way above the Skyform as far as quality of construction is concerned; the fuzzy tail shown is also included in the price, which at $125 is the same as the Skyform’s without a tail.  In terms of flying ability, there is less of a difference, although again the Ultrafoil has the edge.  It launches very easily and its flight is stable under most wind conditions.  It looks very attractive for recreational flying, but will probably be used also by those who wish to lift a camera with it. The kite is produced by Into the Wind, and comes in a very strong carrying case (which could have been a bit larger) and, as I mentioned before, complete with tail.  Altogether very good value, and you can buy it direct from either the manufacturer or from Cobra Kites.  There is also a smaller version, the Ultrafoil 9, at $89.  A bigger version, the 30, will arrive in about July 2014.