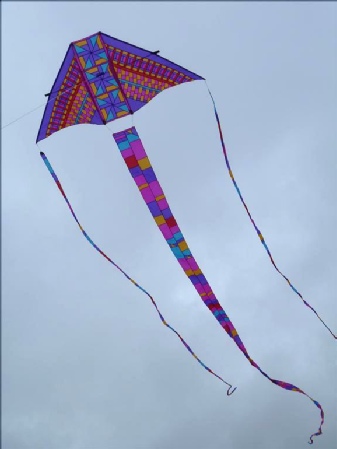 Designed by Barbara Meyer for Premier Kites, this is a double-keeled delta, which flies in a very stable fashion in winds from about 7 to 18 mph.  It could fly in less wind, but that would mean taking off the three magnificent matching tails which come with it, so there is little point.  Two of the tails are 38ft long, and the centre one is 46ft.  The kite itself has a 10.5ft wingspan.  This is a beautiful creation, and involves a lot of work to make.  I haven’t counted, but I estimate there are five or six hundred pieces of fabric sewn together in all.  Most people love it, but I find the colour scheme vaguely unsatisfactory.  Maybe it’s a bit too pink-and-purple for my taste, and somehow it doesn’t stand out against the sky as well as it could.  But I  am getting used to it, and it’s a lot of kite for the money, and very easy to fly.  Rolling up the tails is not so much fun!  Mine came from Kites and Fun Things, but most Premier dealers will have them.  List price (2011) is $219.95.  Note: now discontinued.