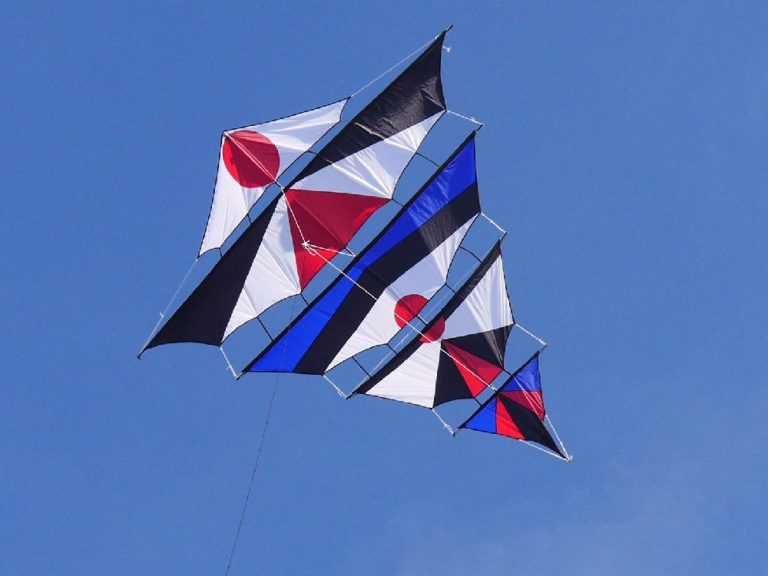 This beautiful kite was originally designed by Charles Brogden more than 100 years ago, and has been re-interpreted and brought up to date in this stunning iteration by the Hespeler brothers.  It’s a big kite – 8ft (2.4m) wide and tall.  It flies very well, in a suggested range of 6 to 18mph (10 to 30kph.)  It has quite a pull in the upper part of that range, and 250lb line is recommended.  Assembly is a little more complicated than with the average kite, but not difficult, although it was made more so because of the faults mentioned below.

The designers deserve a lot of credit for their creation, but the one I received was let down by the manufacturer’s poor quality control.  The bridle was not properly tied, some of the tension lines were not tied, one of the bow-lines was just bundled up and not attached at all, and some of the stitching was very poor.  These are not things one expects in a kite costing $180.  The bag supplied with it is also too short to hold the kite when the cross-spars are all inserted, which is how I want to carry mine.  This means I have to buy or make another bag.  These points are not enough to make me regret buying the kite – in fact, I would like to get the other version of the Brogden diamond, which is called Music Man, a less stunning but amusing design.  I bought my kite from Into The Wind, where, as mentioned, it cost $180.  See also Picture Pretty Kites.