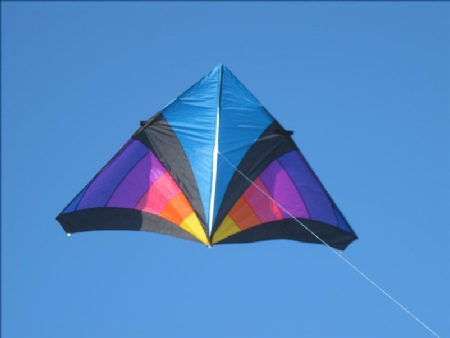 The Levitation is a delta from Into the Wind, produced in two sizes, 7ft and 9ft.  This is the smaller one, which comes in a choice of two colour schemes, built of ripstop nylon with fibreglass spars.  The larger one has only one standard scheme, and is also produced as a “light” version with carbon spars, to fly in lighter winds.  The 7ft kite is great value at $49 (2012 price) and like all deltas is super-easy to set up and fly.  It is well constructed and comes, as do all ITW’s own kites, in a very tough bag which will last at least as long as the kite. It packs down to a length of only 27”, so can be taken anywhere. This is a good choice for the first-time buyer, or someone wanting a kite for an older child, as it doesn’t have too much pull. Although I have many larger kites, I still fly this one often.   Wind speed around 5 to 20mph, but happiest up to 15mph.