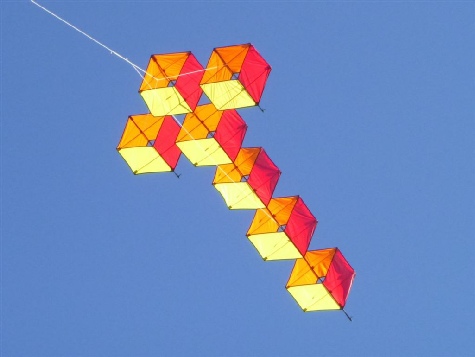 A clever design by Ralf Maserski, the Cube Kite is really an illusion.  Although it gives the appearance of being made up of seven cubes or boxes, it is actually a flat kite, or rather a slightly bowed kite.  It is 92 inches by 54 (230cm by 130) and so big enough to fly high and still be noticed.  It flies rather well, but is definitely not quite as simple to assemble as the advertising might lead you to believe.  The cross spars are already attached, but there are three upright spars, one of them in three sections, to insert, and no less than TEN bowlines to adjust before the kite is ready to fly.  None of this is difficult or particularly time-consuming for anyone who is experienced with bowed kites, but my example came with no instructions and would certainly have baffled someone new to kites.  This is poor, as there are no instructions on Premier Kites’ website either, where they supply instructions for many of their other kites.  The Cube is made in a blue and purple colour scheme as well as the orange and yellow one that I have. It is well-made and good value.  Mine came from Picture Pretty Kites, where it is $99.95.